I had spent the three days before this hike with my family doing a hut hike.  That was an amazing time exploring the Whites through the eyes of my kids, but  I was looking forward to a day with a bit more pace.
I picked this hike mainly to focus on places I hadn’t been and to optimize for relatively easy pickup from North Conway.

I started by cutting across A-Z trail toward Zealand Hut.  I had relatively fresh legs (I had come from Mitzpah that morning) so the hike over the Avalon Trail was no problem.  I find that trail to be very leg-friendly for the elevation gain.  A-Z trail was a little more rugged and less traveled but still very fast.

I stopped at Zealand Hut which I never been during the warm seasons.  I had stopped there once in a winter hike where there is a year-round caretaker but it was a very different scene today.  There were LOTS of people around, a decent gathering of thru-hikers and many day hikers.  I indulged in a delicious piece of chocolate cake from the hut while I sat outside looking at the scenery (picture above).  Eventually though, there were these really annoying flies that were getting to me so I hastened my departure. 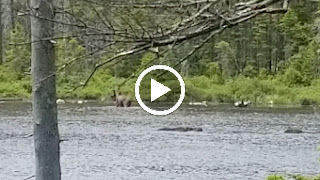 Moving on to the Ethan Pond Trail, I found possibly one of the easiest trails I’ve seen in the White Mountains.  It was such a smooth, flat trail for so long I was happy to take advantage.  There were some great vistas as well, in an interesting non-ridge, yet non-valley setup that you don’t see a lot in the Whites.

However, I eventually turned off onto the Shoal Pond Trail.  This was a very, very different experience.  This was the least maintained maintained trail I’ve ever seen in the Whites.  It was kind of fun in that “I’m going where most people don’t go” sort of way but also meant it was slow going through some really boggy areas on the trail.  I did get to see a very rare moose sighting right at Shoal Pond.  I saw two other hikers on this length of trail who seemed surprised to see another human being.

Eventually I got to Stillwater Junction and things started to look a bit less rugged.  By the way, that area and a bit south of it seems like a great area for camping, with plenty of spots along the Carrigain Branch River.  Hiking up the Nancy Pond Trail, it started to rain and thunderstorm pretty hard but I welcomed it.  The weather was hot and muggy and having some rain pouring on me was quite comfortable.  The trail climbed steadily but was very well graded so it made for reasonable speed.

I eventually go the main point of my hike which was to summit Mount Nancy, a “near-4000er” that was close to my planned path.  I had printed out this description before my hike.  I found it hard to figure out where to catch the path to the unmaintained trail up Mount Nancy, mostly because it was actually TOO obvious.  I originally had walked up that path naturally which from the west seemed like the correct way to go (there was a detour I missed where the actual path goes now).  So I walked back and forth for a bit before I figured it out. 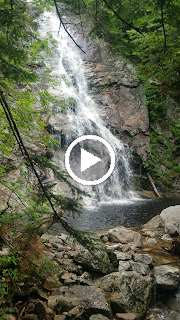 The climb up Mount Nancy is one of the steepest and overgrown I had done.  The overgrown I kind of expected being an unmaintained trail, the steepness combined with a lot of erosion was a bit unexpected and made my summit take longer than I expected for the short amount of distance.  It was also late in the day and my legs were starting to slow down.  But I made it up to the top and even though I didn’t get a view, there was a very nice clearing there where I had a decent snack.

On the eastern side of Norcross and Nancy Pond, the descent became fairly difficult (especially compared to the easy elevation on the western side).  But there were some nice valley walks and this beautiful waterfall on the way, which made the time more bearable.

Finally, nearing 302, I actually completely lost the path and still don’t understand what happened.  I ended up walking onto some one’s driveway I think and ending up a quarter of a mile north of the parking lot.  Luckily I guessed the right direction to walk when I hit the highway and eventually found my pickup spot.

Overall, it was a really interesting hike with lots of variety in terms of trail terrain.