Every year for the past five years or so I’ve taken part in a walking contest at work, called Walktober.  The goal is to get as many steps as possible in the whole month.  So my friend Josh who also is involved in this contest and on my team thought, “What a great way to get a lot a useless steps by doing Owl’s Head”.  That way, we can see the completely wasted miles walking along Lincoln Woods trail as a positive thing and not just delayed awesomeness.  This was a great idea, so rather than wait until the end of our 4000 footer list like most people, we decided to do Owl’s Head fairly early on.

We took a day off of work for the hike, woke up at 5am and made it to the Lincoln Woods parking lot a little later than 7:30am.  It’s late fall, so the sun had barely risen when we started the hike.

Distance: 18 miles (+3 for two detours to see Franconia Falls and Black Pond)
Total time: 10 hours
Weight: 17 pounds, 8 pounds base
Peaks: Owl’s Head
New Gear: Microspikes
We started off along Lincoln Woods Trail.  If you’ve never walked along this trail, it’s an old railroad bed that runs along a river.  It’s excruciatingly boring.  There is no terrain to distract you and not much of a view besides every once and the while a glimpse of a mountain through the trees.  I think the best thing that can be said about it is that it’s a good warmup to an actual hike like a pemi loop.  We were in cold weather gear when we left because it was around the freezing point, but we started shedding layers pretty quick.

We turned onto the Franconia Brook Trail, which was not challenging but far more pleasant, IMO.  It wasn’t as wide and had some stream crossing and occasional terrain to break up the walk.  There still was no elevation or to be more accurate there was a slight upward slope approaching Owl’s Head, but nothing very noticeable.

There are two large brook crossing right when you turn off Franconia Brook onto Lincoln Brook Trail.  We’ve read they frequently require fording but the water levels have been so low recently that by walking downstream a bit we were able to cross both of them by rock-hopping.  We each took a small step into the brook in the process, but not enough to soak through the shoe.  I should mention that Josh was in boots and I was in trail runners.

After walking up Lincoln Brook Trail a bit and having an easier crossing back to the Owl’s Head side of the brook, we found the turnoff.  It was pretty well marked, as you can see from the picture.  Maybe this could be a problem in deep snow, but any worries we had of missing the turnoff were unfounded.

We began the actual ascent of Owl’s Head right after the turnoff.  It got steep very quickly as we started to walk up the slide.  Finally, we had some views.  Looking back across the valley, we could see the Lafayette slide and a snow storm covering most of Franconia ridge.  This storm eventually crossed the valley and came to visit us.  The rocks on the slide were mostly bare going up the slide but there was some snow in the crevices.  These were making it difficult on the ascent, particularly for me in my trail runners.  Josh was having less problems in boots.
One of the secondary goals of this expedition had been to test out microspikes.  I was sort of hoping to find some slippery snow/ice to get to try these things I had just spent 60 dollars on.  So I put them on during the ascent mostly for curiosity sake.  Wow was that a good move.  I had not even noticed how much extra effort I was spending on keeping a good footing.  The microspikes almost made me feel like I could walk straight up the side of the slide.  I quickly overtook Josh and suggested he give them a shot too.  He was quite skeptical but after putting them on admitted that they also really improved his footing.

When we got near the top, we ran into two other hikers who were coming down from the summit.  We exchanged greetings and Josh gave them a sales pitch on his new iPhone model for taking pictures.  Those were the only real hikers we saw out the whole day.  They told us to follow until we stopped seeing footprints to get to the true summit.  To those readers who don’t know Owl’s Head, it’s mostly famous for being the last summit people climb on the 4000 footer list and also for the story of it’s summit.  Short story is that everyone has been going to the wrong summit, some one knew this 50 years ago but the information got lost, and wasn’t rediscovered until a couple years ago when they did another survey and found another higher summit several minutes away from the false one.
Nowadays that information is actually a bit misleading or it was for us at least.  Because we walked right by the false summit and when we got to the real summit, Josh was pretty convinced it was the false summit.  And there was a faint footprint of some one wandering off on the other side, so he convinced me to follow him into the trees.  We walked for a while into the wilderness until it was clear we were descending when he finally conceded that perhaps that was actually the true summit.  I had seen a small cairn and some remnants of markers on trees at the false summit so had a stronger feeling that we had reached the actual summit.
In the meantime, the snow had started coming down quite fiercely.  We had put on all our winter gear and we were quite glad for it because the wind was blowing very strongly and it had dropped 10-20 degrees during the ascent.  We both love snow so it was actually really nice at the top as we got a taste of the coming winter much earlier than we ever had before. 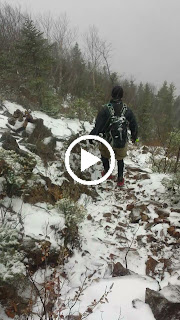 The descent off the summit would have been much more difficult than the ascent if it wasn’t for our microspikes.  I swear it was easier than descending in the summer.
Once we reached the bottom, we had our lunch with some hot cocoa (I had brought a jetboil just for this purpose).  I managed to talk Josh into not completing the loop as I was concerned by some reports of the trail being hard to follow.  Additionally, we were about an hour behind our expected pace, so I didn’t want to take a chance late in the day.  Instead, we decided to make the side trips to Franconia Falls and Black Pond on the way back to Lincoln Woods.
In all, we ended up with 50k steps each for the day, a nice boost for our team for Walktober.